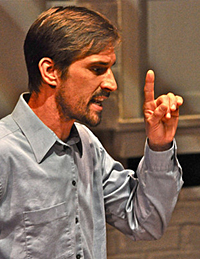 An instructor in San Diego at the college level and privately for the past 10 years, Francis Gercke is committed to the development of the actor’s individual approach to acting. A graduate of The Actors Studio Drama School at the New School for Social Research, Mr. Gercke believes that acting is a craft and requires a specific set of skills to fully realize the demands of any script. His nearly 20 years of professional experience on stage and in the classroom has demonstrated that there is no one correct “method” for everyone. His mission as a teacher is to guide the actor towards a physical approach to scene analysis and character development that will inspire the actor in auditions, rehearsals, and performance.

In 2001, Francis co-founded New Village Arts Theatre in Carlsbad and served as the Artistic Director until 2008. From July 2008 through August 2010, he worked with Cygnet Theatre as the associate artistic director. He is a member of Actor’s Equity Association and has worked professionally in San Diego with such companies as the San Diego Repertory Theatre, Cygnet Theatre, North Coast Repertory Theatre, ion theatre, Moonlight Stage Productions, New Village Arts Theatre, and Sledgehammer Theatre.